Many business leaders aspire to achieve innovation leadership. This means doing what Apple repeatedly demonstrated under Steve Jobs – that the best way to predict the future is to invent it.

The Mac family of computers. Online music and portable personal multimedia devices. Full-length 3D CGI animated movies. The iPhone, iPad and the Appstore ecosystem. Each of these innovations contributed to making Apple the highest valued company on the planet shortly before Steve Jobs’ untimely death in 2011.

Innovation leadership – seeing beyond what other currently see 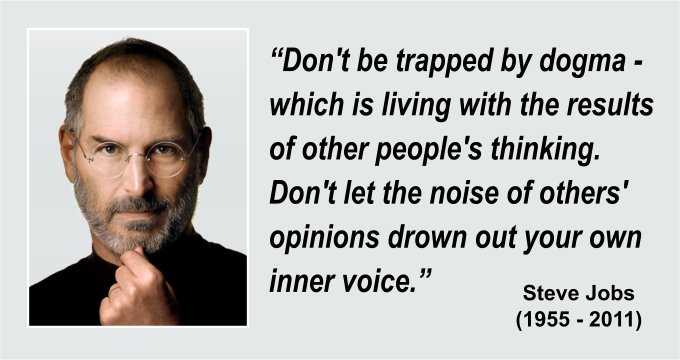 Each of these innovations also demonstrated Apple’s ability under Jobs to escape prevailing orthodoxies and see what others could not yet see, including:

Jobs himself placed a central importance on avoiding becoming trapped by dogma. In his advice to Stanford University graduates in 2005 he said this: “Don’t be trapped by dogma – which is living with the results of other people’s thinking. Don’t let the noise of others’ opinions drown out your own inner voice.”2

Jobs encountered a kindred spirit in Alan Kay – someone else who eschewed dogma and whose ability to see beyond the orthodox contributed significantly to Apple’s success.

Having learned to read by the age of three, Kay was better prepared than most of us for what came next:

“By the time I got to school, I had already read a couple hundred books. I knew in the first grade that they were lying to me because I had already been exposed to other points of view. School is basically about one point of view – the one the teacher has or the textbooks have. They don’t like the idea of having different points of view, so it was a battle. Of course I would pipe up with my five-year-old voice.”

“The true voyage of discovery lies not in going to new lands, but in having new eyes” – Marcel Proust

Kay saw clearly that the orthodoxy was just one of many ways of seeing things. He recognised that other points of view might be more valuable. Hence his famous observation that “point of view is worth 80 IQ points”.

Kay was fascinated by how children learn and wanted to create computer-based design tools for kids. Adopting a different point of view, Kay saw beyond the orthodox view to see ‘computer as superpaper’. What if computers worked like drawing graphics and writing text on paper? Such computers would be able to display, copy, store, retrieve, mail and recycle.

Kay observed that “The commercial goals at PARC were vague. The only sentence I remember is if someone gets rid of paper in the office environment, it should be Xerox.”

Innovation like this can only flourish when the organisation creates a culture that encourages people to genuinely respect, authentically value and actively seek out the different perspectives of others.3

But Xerox top management were too trapped in the orthodoxy of the copier world and could not see how to capitalise on the breakthroughs made by Kay and his colleagues.

Then in 1979 PARC hosted an altogether more visionary visitor called Steve Jobs. The rest, as they say, is history…