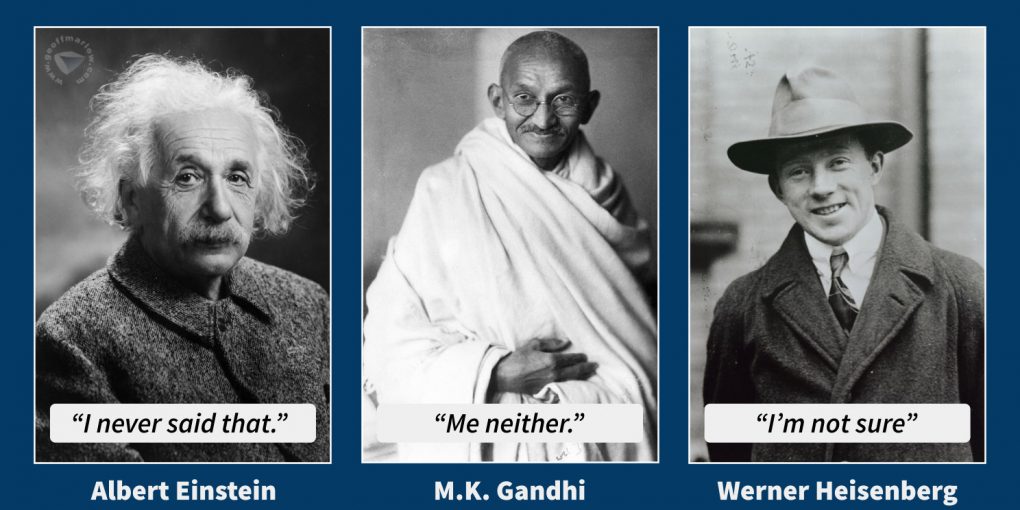 Ever come across an inspirational quote by someone famous that crisply captures and conveys an important insight? Only to have the inspiration morph into irritation when you discover they never actually said it?

In 30+ years working helping people build innovative agile organisations, I’ve been inspired and irritated by a number of inspirational quotes that unfortunately aren’t.

Here are four of my ‘favourite’ famous non-quotes:

Why I like it as an inspirational quote: Most organisations fail to become innovative and agile because key influencers (the people who affect everyone and everything else) are trapped in old perspectives.

Innovative agile organisation are built on the innovative mindsets that people cultivate when they recognise, accept and operate from the awareness that all any of us ever has is a partial, biased and one-sided ‘2D’ perspective on the bigger picture ‘3D’ reality.

In other words, none of us is as smart as all of us – and building innovative agile organisations involves cultivating thinking at a different level than created current organisational reality.1

The more ingrained the awareness of being a vet, being a farmer, or being a butcher, the greater the conviction that seeing the patient, seeing the money, or seeing the meat is seeing ‘reality’.

In organisations, ‘Seeing-Being Traps’ such as ‘I’m the decision maker’, ‘I’m the expert’, ‘I’m the resource controller’ etc. are a huge and often seemingly intractable barrier to innovation and agility.2

Why I like it as an inspirational quote: Key influencers may genuinely want their organisations to be innovative and agile. They may even genuinely recognise that this involves the systemic, organisation-wide adoption of the innovative ‘2D3D’ mindsets described above. But it won’t actually happen in practice if they don’t adopt and operate from this mindset themselves and thereby influence others by their example.

(The ‘be the change’ quote was, however, from a Gandhi – Arun Gandhi, M.K.’s grandson, when asked to summarise what he saw as the main teaching of his famous grandfather’s life).3

Why I like it as an inspirational quote: Anyone who’s successfully guided a truly radical innovation through the minefields, man traps and multidimensional defences of an established organisation will have direct personal experience of these three phases – with people telling them: “That’s an absolutely crazy idea”; then “That’s only going to happen over my dead body” and eventually “It’s a great idea and I thought of it first”.

In a similar spirit, there’s this genuine quote from the founding father of quantum theory:

Why I like it as an inspirational quote: It may not sound very ‘scientific’, but it’s what happens when authority figures get caught in the Seeing-Being Trap of ‘I am the expert.’ It even happened to Einstein himself. 4